Expect the Great at Snow College 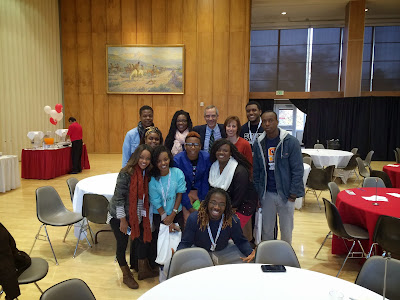 My wife Kathy and I attended an event called Expect the Great College & Career Readiness Fair, held last Saturday at the University of Utah. The Fair was conceived by Regent France Davis and has turned into a very successful event designed for the African and African American communities interested in college education. Rosie Connor, Snow College’s advancement director, took a group of our students up to the fair. They had a great time. At the end of the day the students wanted a picture of everyone—hence this blurry shot taken with my iPhone.

Friday, the day prior to the fair, I gave a presentation to the Board of Regents regarding diversity at Snow College. We have made considerable progress in attracting a more diverse population of students to Snow College and in helping them succeed. The numbers are relatively small but the direction is significant!

When I arrived at Snow College in 2007 we had no program targeted specifically to recruit or support minority students. That year, we had a total of 296 minority students, which constituted 9% of our student body. Among the minority groups we had 116 Hispanic, 69 Pacific Islander, 65 American Indian, 24 African American and 22 Asian students. (These numbers do not include international students.) We opened the first multicultural center that first year and hired a director, Fernando Montano. With a little work we have steadily increased the number of minority student to 519 or 13% of the total student body. While the College has grown considerably since 2007, the minority student population has grown at a more rapid rate.

This success has only been possible because of the great work of Fernando Montano in the Multicultural Center, our advisors in the Student Success Center and Student Support Services, as well as financial aid advisors, club advisors and many other staff members across both campuses. And of course, I cannot fail to mention our faculty members who regularly help all students in need of a little extra time now and again.

While these results are encouraging we have more work to do. Rosie Connor, our advancement director, and Craig Mathie, Vice President for Student Success, are leading an effort designed to help the College become even more inclusive. We are committed to success for all students who come to Snow College. 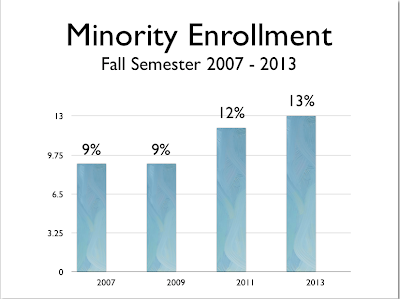 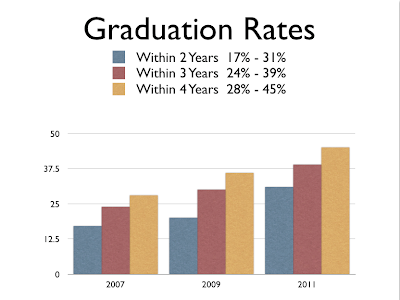 Posted by Scott L Wyatt at 1:33 PM No comments:

The college Student Ambassadors conducted a service project Saturday. They got together in the morning and spread out around Ephraim. 30 large projects were organized in advance. More students showed up than expected, so, some of the students started on the organized projects while the rest of them went door-to-door looking for additional projects. By the end of the day more than 100 families, mostly senior citizens, were helped with everything from leaf raking, window cleaning, vegetable gardening, wood chopping and stacking, winterizing and hauling off trash.

Every club on campus conducts a service project yearly. But the 30 ambassadors decided to do a super service project and they brought together 210 college students for their day of service. They dubbed it the Warmest Snow on Earth Service Day. And a warm day it was! At the end of the day I bumped into a senior gentleman who lives in Ephraim. He was extremely grateful for the work done on his yard. He told me the dozen students got more work done in a few hours than he could have completed in two weeks.

This kind of activity in a small town such as Ephraim, Utah, is felt by most of the residents. The ambassadors’ advisor, Amie Anderson, sent me the picture of these young ladies raking leaves. What a great day! 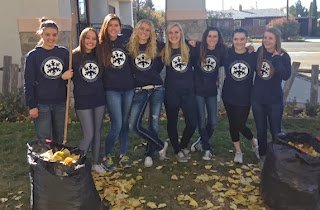 Posted by Scott L Wyatt at 3:55 PM No comments:

Over the past year we have been engaged in a very exciting strategic planning project at the college and we are now nearing the final phase, which is prioritization and resource allocation. The effort has been headed up by a 21-member strategic planning taskforce co-chaired by Melanie Jenkins, Professor of English, and Marvin Dodge, Vice President for Finance and Administrative Services. We have a website full of great information; a screen shot of the home page is below and the link is http://www.snow.edu/vision/ 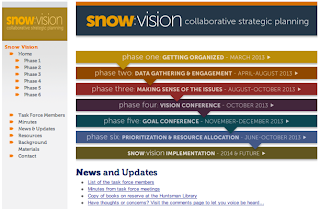 Posted by Scott L Wyatt at 9:59 PM No comments:

I have some involvement with international students and/or visiting guests nearly every week—one of the wonderful benefits of working at a college with a nice global engagement program. This week has been a particularly interesting example.

Monday evening I had dinner with a delegation of four educators from China. They are here exploring partnership opportunities with Snow College. We also had Her Excellency Rosemary Mendes of the Congolese government on campus Monday and Tuesday. I met her in DR Congo when I visited there last summer; it was fun talking with her again. Her son is a student at our college. After dinner, Dr. Nagwa Nawar, our Fulbright Scholar in Residence from Mansoura University in Egypt, gave a presentation on Religion in the Arab World. It was fascinating for my wife Kathy and I to look for all the similarities that exist between our religions.

Tuesday at noon, our small group of Saudi Arabian students put on a wonderful program for elementary school students in our student center. They danced, and even cooked a big lunch of traditional food for everyone.

Thursday night our athletic director, Rob Nelson, and I took eight students from China and Vietnam to Salt Lake for dinner at an extremely authentic Chinese restaurant. I have come to know this group of students quite well. They loved the food and I loved watching them have so much fun eating it.

And finally, I rounded out the week Friday with lunch at an authentic Mexican restaurant in Ephraim. So, this week, I had authentic Chinese, Mexican, Saudi Arabian and Egyptian food. Oh, and I had authentic American food! I spent time with visitors from China, Congo and Egypt. We have small numbers of international students at the college from 25 different countries. They are fully engaged on our campuses; they serve as student body officers, participate on athletic teams, perform in theater, music and dance productions and one even works part-time in my office.

I have attached a couple photos I took with my phone. 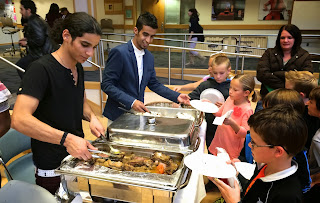 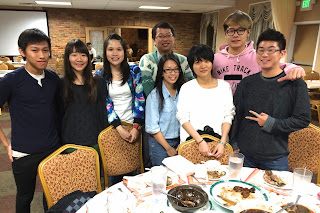 Posted by Scott L Wyatt at 5:43 PM No comments:

Snow College is Up!

When the LDS Church announced last October the age for missionary service had been dropped from 19 to 18 for male members and 21 to 19 for female members, colleges and universities across Utah braced for the impact it would have on their enrollments. Snow College, with the youngest and most LDS student body in the state, had the most to be concerned about. Early projections were the College would drop by as much as 25%, of its tuition paying students. An enrollment drop of this magnitude would have a huge financial impact on tuition revenues and auxiliary operations such as housing and food services. The result would be lay-offs and program reductions.

The College came together and went to work. Now, after months of worry and long hours, everyone is taking a deep breath and a sigh of relief. You might call it a miracle of sorts because, while enrollments dropped at every university in Utah, they stayed steady at Snow College. In fact they increased, a little. The official Utah System of Higher Education Fall 2013 3rd Week Enrollment report is just out and it reveals the number of students at Snow College actually increased this fall over last fall—by 6 students—and full-time equivalent enrollments increased—by 25 students—not bad.

The graph that follows shows the percent change in full-time equivalent (FTE) students at each college and university from fall 2012 to fall 2013. FTE is a way of counting full-time students. 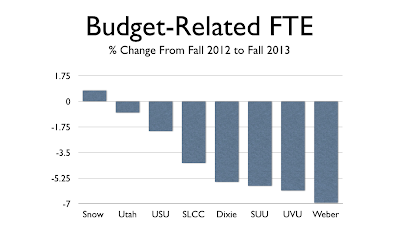 The next graph shows the percent change in total students from fall 2012 to fall 2013, including full-time and part-time students. 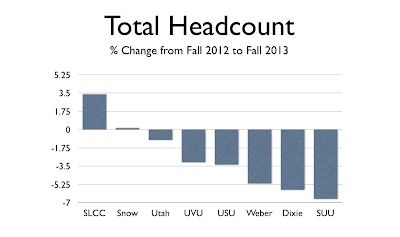 This final graph shows the growth in FTE students over the last five years. Snow College leads with 8.12% per year, or 40.6% over five years. This growth suggests high school graduates, and parents, looking for the best value for a higher education are finding it at Snow College. 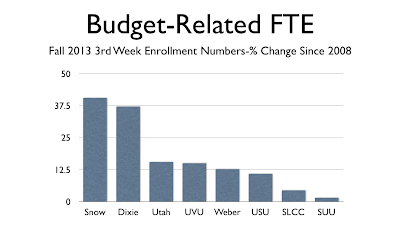 Posted by Scott L Wyatt at 6:02 PM No comments:

Snow College is the Best College in America!

Three national organizations published rankings of two-year colleges during the 2013 year. All three put Snow College in the top 10 nationally—not 10%—top 10. By the way, there are about 1,200 two-year colleges in the country. And as if this was not enough, when we look at the three ranking together it becomes apparent that Snow College is the only school included in all three top 10 lists, making it arguably the best college in America!

The first ranking this year was published by CNN Money, the world’s largest business website and the online home of Fortune and Money magazines. CNN Money listed Snow College 6th in the country for student success. This ranking is “based on the percentage of students that graduated within three years or transferred to four-year colleges.”[i] To my knowledge CNN Money is the first such organization to give Snow College a national ranking.

The Best Schools, a leading resource for campus and online education, published the second ranking out this year. The Best Schools placed Snow College 8th in the country. Like CNN Money, this group included graduation and transfer rates in its consideration. However, they added a number of other variables to the mix including, “strong rates of employment, salaries and advancement for graduates matched with workplace skill needs,” “policies and practices that result in student diversity and success among low-income students and underrepresented racial/ethnic groups, and “reasonable tuition costs, access to financial aid resources and an emphasis on minimizing post-school debt.”[ii]

The final ranking published this year was complied by the Washington Monthly in its September/October 2013 printed edition. Washington Monthly ranked Snow College 9th in America, based on data from the Community College Survey of Student Engagement, housed at the University of Texas at Austin, and U.S. Department of Education measures of student retention and completion.[iii]

[iii] This ranking can also be found at http://www.washingtonmonthly.com/college_guide/rankings_2013/community_rank.php (accessed October 18, 2013)

Posted by Scott L Wyatt at 3:57 PM No comments:

College Avenue is not only the primary route to the College from Highway 89 in Ephraim; it is a historic sheep trail. For more than a hundred years sheep headers have taken their sheep up the road through the middle of the College to mountain pastures in the spring and back down the road in the fall. Our Asian international students line up on the side of the road with smiles and cameras. It is part of our heritage. And we all love it. I am indebted to Wally Burris for this shot.
Posted by Scott L Wyatt at 10:15 PM No comments: 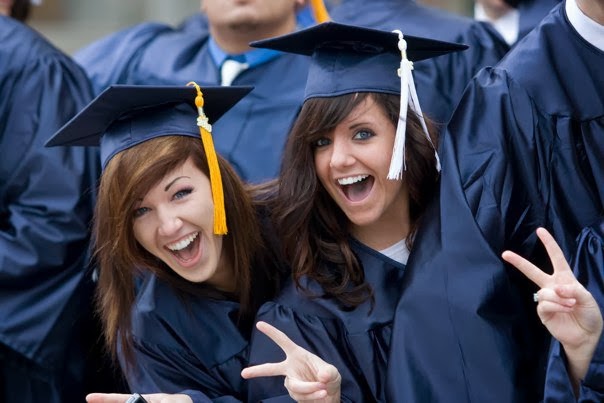 Snow College has the 6th best graduation/transfer rate in the nation. 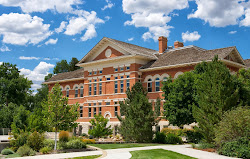 The historic Snow Academy dedicated in 1909 and rededicated, after significant renovations, in 1999 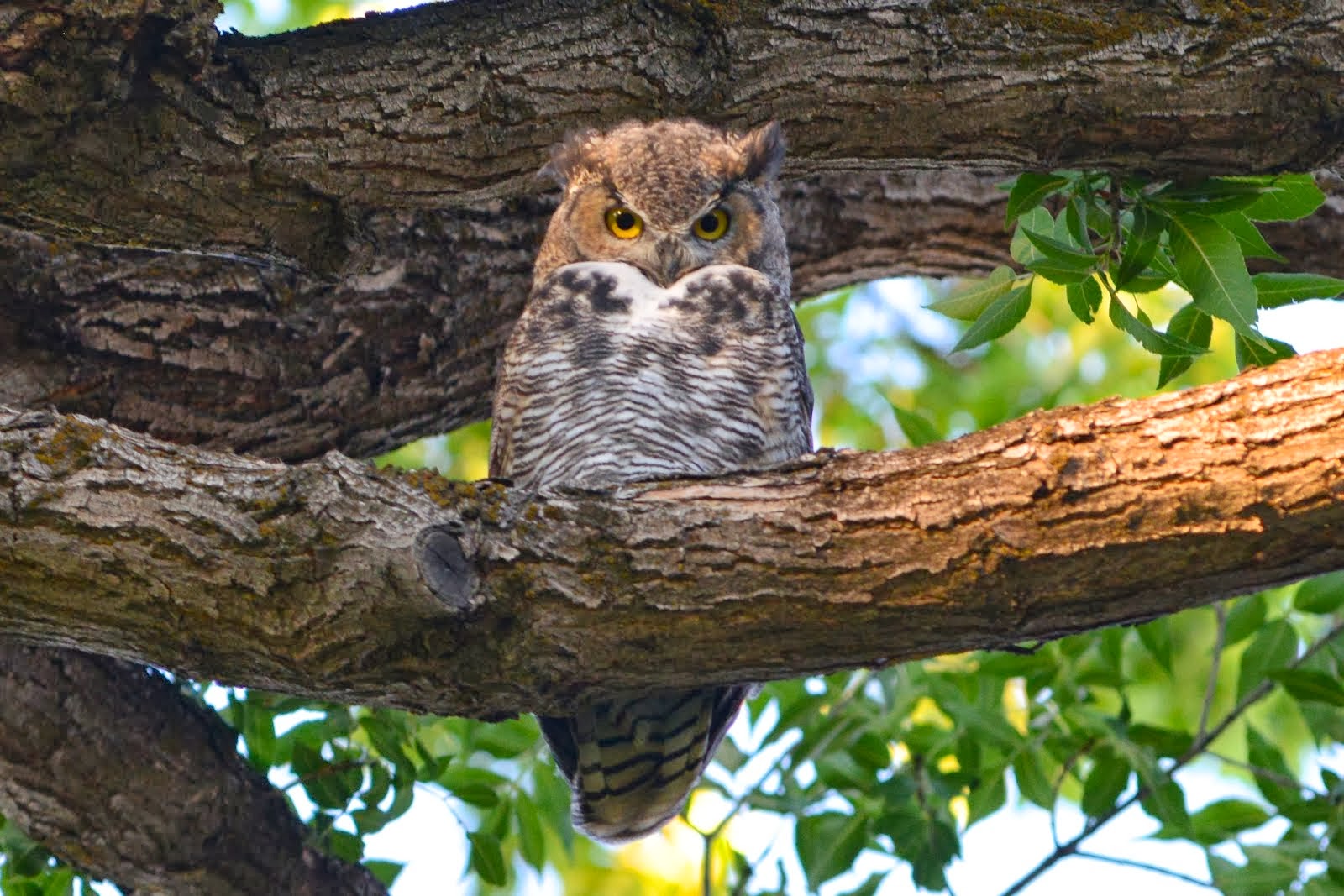 My picture of our resident owl.